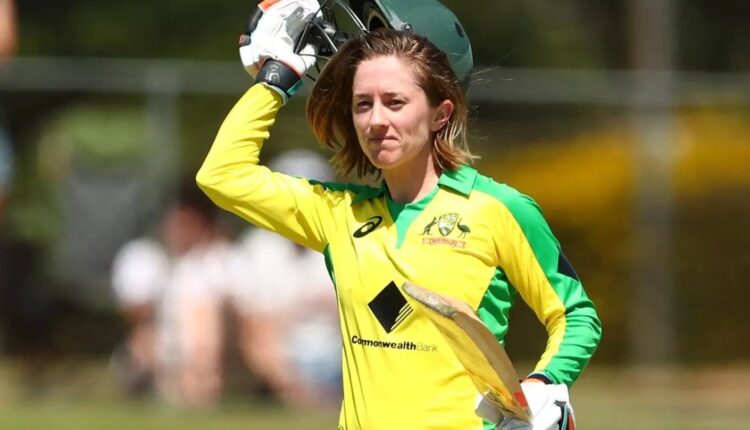 Rachael Louise Haynes is a veteran Australian women’s cricketer and she helped her Australian national team to win World Championship trophies 6 times in her entire career. Haynes was a left-arm batter and she was also the regular vice-captain of the Australian Women’s cricket team from the year 2017 till 2022.

Haynes was also a popular name in the WBBL(Women’s Big Bash Leagues) as she was the skipper of the Sydney Thunders team. On the 15th of September, 2022, Haynes retired from all formats of cricket and also from the WNCL(Women’s National Cricket League) as there also she used to play for the New South Wales team.

From a very early age, Haynes was pretty passionate about playing cricket and she used to play with her siblings with even sticks using those as a bat and that time her idol used to be Shane Warne but later it was changed and Cathryn Fitzpatrick and Belinda Clarke became her idol.

When she was only 11 years, she was approached by her neighbor to join the North Balwyn Cricket club and that was her first experience playing cricket properly. Later she moved to the Box Hill Cricket Club and where she used to play with her future teammate, Meg Lanning.

In 2004, she completed her VCE programme at “Our Lady of Sion Collage”. Rachael also made her diploma in Management from the Box Hill Institute and after that, she completed her graduation in Marketing from the Australian Catholic University. After announcing her retirement from cricket she again started her studies and pursued MBA from the University of Southern Queensland.

Haynes got married to Leah Poulton who was also a cricketer in the Australian domestic circuit and in the month of October 2021, they had their first child named Hugo Poulton-Haynes.

Due to the business end of the 2008-09 cricket season, Haynes was selected for the Australia A team in a series against New Zealand A but failed to show her dominance there. But later in 2009, Haynes was called up for the international selection against England team in the ODI format on the 7th of July and scored only 26 runs. Though the match could get completed as it was declared abandoned for a heavy shower.

Only after 3 days after her ODI debut, Haynes was selected in the Test series as well against the same team and when she came out to bat on her debut test, Australia was 28/5. From there along with the skipper, Jodie Fields, both put up a massive partnership of 228 runs. Unfortunately, Haynes got out at 98 runs and missed her century on her debut test match. On the 2nd day of her debut test, Haynes also bowled 4 overs and took 1 wicket without giving out a single run. Though the game ended with a draw in the end.

In both ODI and Test formats, Haynes gave several brilliant performances against tough cricketing nations like England and a few more. In both these formats, Haynes played in the opening position as well as a middle-order batter and in both scenarios her performances were quite brilliant.

Due to her dominant performances in these formats, on the 21st of February 2010, Haynes got her chance to play the first T20I match of her career which was against New Zealand.  Though in that match she got the chance of batting at the 6th position and she remained not out in 14 but Australia lose that match by just 2 runs.

Haynes in her career has played only a single test match in Ashes during the 2010-11 season and failed to deliver with the bat, scoring just 21 and 4 runs from 2 innings. Though she contributed with the ball in hand and took a crucial wicket of Jenny Gunn and broke the threatening partnership in the first innings. After 8 long years, Australia was able to win the Ashes.

In the 2012 T20 World Cup in Sri Lanka, Haynes was selected for the squad but got the chance of playing in just 1 game in the group league. But during the semi-final, her contribution of 15 runs in the lower order helped the team to win by 28 runs against the Windies Women’s team. But in that World Cup, Australia lose in the final against England by just 4 runs.

Her Success In World Cups

The 2013 World Cup that took place in India was memorable for her as she contributed to the team during the entire tournament. Haynes scored a solid 39-run knock against Pakistan in the very first game on a difficult batting track and helped the team to win by 91 runs. In the second game against South Africa, Haynes scored a brilliant 83 runs inning and Australia won that match as well. Against Sri Lanka, her innings of 71 runs helped the team to reach the semi-final.

In the final match against West Indies in the ODI world Cup, Haynes again played brilliantly, scored 52 runs from 74 deliveries and Australians won the World Cup convincingly.  In the entire tournament, Haynes was the highest run-getter among all, scoring 273 runs with a respectable batting average of 45.50.

Rachael Haynes in her career played 77 ODI, 75 T20I, 110 WNCL and only 6 Test matches. Her records in all the formats were pretty brilliant and in ODI, she scored over 2.000 runs and in WNCL, Haynes scored a total of 4.115 runs which included 25 half-tons and 7 tons in total.

Rachael Haynes was a brilliant batter for Australia for several years and her contribution throughout entire formats was above average. There are many people worldwide who love to know about women’s cricket but do not know where to find cricket sports update. In this world with technology and the internet, you can find all the latest updates, and news about cricket easily via several websites and applications.

Know all about cricket news and updates at CBTF news.

Get the fastest cricket news update at https://cbtfspeednews.com/.

Know all about cricket betting and updates at CBTF betting.

Get the updated expert betting tips at https://cricketbettingtipsfree.com/

Checkout our videos to get the latest updates about cricket and betting tips, and casino tips to win big with expert opinions at https://www.cbtfmytube.com/.

How Does Getting A Full Stack Developer Certification Help You?

How To Get Started With Pickleball